Discovered by the Portuguese navigator Martin Afonso de Souza in 1531, Morro de Sao Paulo took part in the history of the colonization of Brazil. Just a few people know, but it was also the scene for World War II where a Nazis ship wrecked in front of the First Beach, that’s why Brazil entered the war. Many of the shipwrecked were helped by the natives who were there at the moment and remember today as a time of fear.

Despite its discovery has occurred along with the discovery of Brasil, until recently Morro de Sao Paulo was still a very quiet place to live. As former residents tell, the local natives survival was basically fishing. A small village where until the 70’s hadn’t any telephone or electric light, the first generator only between 17h to 22h. The electricity came to Morro de Sao Paulo only in 1985.

The residents were taking baths in the collective “Fonte Grande” (Great Source) – water supply system built in the seventeenth century. It was also in the Seventies that the quiet village began a process of being discovered by the world. Today Morro de Sao Paulo is the third most visited touristic place of Bahia. At this time the first vacationers from nearby towns began to appear on the island and spend the whole summer. Initially they rented the houses of the fishermen but after a while they began to build their vacation homes, located primarily on the “Primeira Praia” (First Beach). 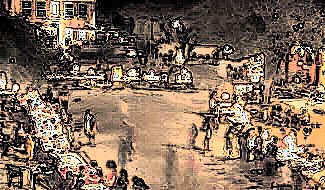 Then it was the turn of backpackers and hippies who came to enjoy this paradise of beautiful beaches and rainforest yet unexplored. It was them who spreaded the legend tropicalparadise island Morro de Sao Paulo in Brazil and the whole world, bringing many visitors. Many, charmed by the beauty and quiet life in the place, left their lives in the metropolis and decided to stay in Morro de Sao Paulo. This mixture of races and cultures on the island of foreigners who live intermingled with the local culture is giving Morro de Sao Paulo a unique feature of a place that seems to belong to the world, where everyone who knows this feels himself at home.

Due to this avalanche of new residents and tourists who frequented the island, the homes of native fishermen started to become Pousadas and Hotels, Restaurants, Shops, Pharmacies, Ice Cream Stands, Fast Food Restaurants, and also Health Center, Schools, Police, etc. so the infrastructure and progress began to appear – progress here is slow and difficult, since Morro de Sao Paulo is an island with no connection to the mainland. Even like that the island has been growing nonstop. 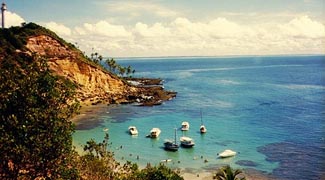 On the beaches, where once have been lots of coconut plantations, began to appear also restaurants, inns, ice cream stands, parties and the lands that have being sold to foreign owners, a lot of them without showing up years in Morro de Sao Paulo. This time came the so called invasions, beeing new residents building their homes disorganized mainly in the Second Beach and Third Beach. But even having sufered so many changes Morro de Sao Paulo is still preserving the natural beauty of its beaches. 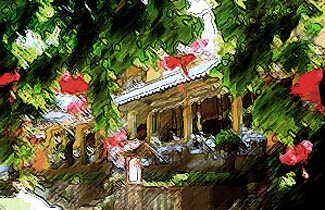 The island has no connection to the mainland, Morro de Sao Paulo is located 60 km south of the capitalof Bahia, Salvador. It’s a city in the district of Cairu – the only island in the archipelago whwhich has a bridge connecting it to the mainland. Thus, in the village of Morro de Sao Paulo until todayaren’t any cars, except the tractor passing through in the mornings to collect the garbage and the ambulance in case of accidents. Parallel to the Second Beach is a street away from the hotels where is the receptive to the Fourth and Fifth Beach Beach The access for the guests of the pousadas here come to the village through their land rovers, buses and tractor which also provide access to the runway of an air taxi company that performs the transfer between Salvador and Morro de Sao Paulo.

The beaches are in numerical order, the First beach is most frequented by the natives, the Second Beach ensures agitation during day and night, the Third Beach with all types of hotels, less hectic, but with easy access to downtown, the Fourth Beach is the largest, but little frequented with clear and warm water and the last beach, Quinta Praia or Praia do Encanto de Morro de Sao Paulo, isolated and semi desert with luxury hotels and inns.

That’s why Morro de Sao Paulo is a great destination for all types of tourists. From those who prefer the ease and convenience of hotels offering all the comforts to its guests on beautiful semi desert beaches unto the backpacker. The island is perfect for couples on honeymoon and adventurous, those who prefer the day and those who enjoy dancing until dawn. In this paradise, away from the hectic life of cities, all types of fun are guaranteed.