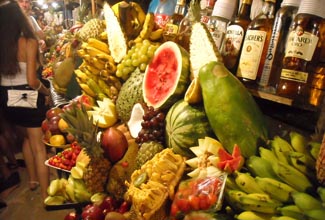 Morro de Sao Paulo has much more than just beautiful beaches for it’s tourists: Parties in all styles and colours for it’s visitors and local residents. Few people know that, but Morro de Sao Paulo is famous for its parties every day of the week during the whole year. Nightclubs, luaus(Brazilian Beach Parties), bars and live shows ensure the enjoyment of everybody. The evening begins at bars and Caipifrutas (Foto) in the village and Second Beach, where people warm up before going to the party. The most of them usually open at midnight, but people start arriving at one o’clock in the morning. The end of the party depend on the courage of the crowd, they often end up as the day dawns.

It is common that the organizers of the parties and festivals combine the weekdays, so that each establishment becomes more crowded and thus avoiding that the tourists are divided into two or more parties. Thus on Sundays the parties are in Pulsar Disco located on the path to the historical fort. During the summer this disco is promoting parties with different themes like Kryptonite, Casino, Fantasy, Flash Back. This kind of Parties are just the right thing for those looking for fun on Saturdays.

On Friday night the party is at the Toca do Morcego (bat cave), that is located on the way to the lighthouse and ensures a party agitated on a beautiful point of the island with a breathtaking panoramic sea view. Here the sound is electronic music, so that the crowd can be dancing and having fun. Also in the Toca do Morcego you can watch the sunset in a chill out area with gentle sound of house music followed by live music. The place is perfect, beautiful people and great atmosphere. Definitely worth a visit. 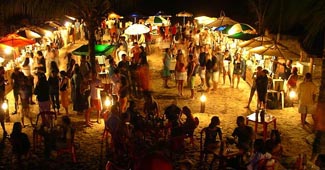 The Luaus (Brazilian Beach Party) on Mondays and Thursdays at the Second Beach of Morro de Sao Paulo are open to the public. Tents to the seaside and Caipifruta cheering tourists. This is also the most frquented place by the locals. The sound ranges widely, axé, pop, electronic music and samba rhythms are just a few. In high season or on some holidays there’s a small stage with live music. This festival has a tradition in Morro de Sao Paulo, being celebrated since the time when there were only the native and the first hippies. 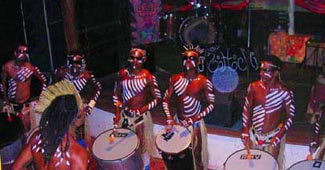 On Wednesdays, happens the more traditional fest day of Morro de Sao Paulo, located in the district Mangaba, having to climb a stair with 188 steps. The theater starts early, around 21:00 hours, you can see presentations of capoeira, traditional dances, classic theater, poetric lectures and live music. Around midnight the party starts with DJ playing electronic sound and the whole theater turns into a big party that is more reminiscent of a disco and ends only when the day breaks. 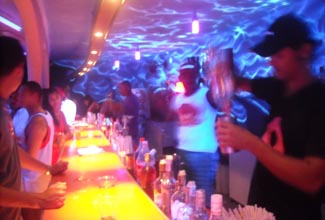 The parties have an impact of people not very big during the low season. During the high season the average number of tourists increases and so the quantities of parties increase as well. Currently in high season we already hear of daytime parties in Morro de Sao Paulo. During holidays, New Year’s hangover and the carnival festivities the number of tourists compared with the peak season can be tripling. This is another feature that makes Morro de Sao Paulo a unique place. A mixture of races, beaches, the charm of being an island and no cars in addition to parties every day of the year make this place a beautiful paradise known and loved worldwide.

During high season some other places also make their parties. The restaurant and bar Funny, The Bar “O Bar”, Peixe do Morro and Ponta da Ilha at the Second Beach. Across the island, at the Praia da Gamboa, also happen electronic music Full Moon parties with international DJs and an amazing visual to the seaside with a capacity of more than 10 thousand people.